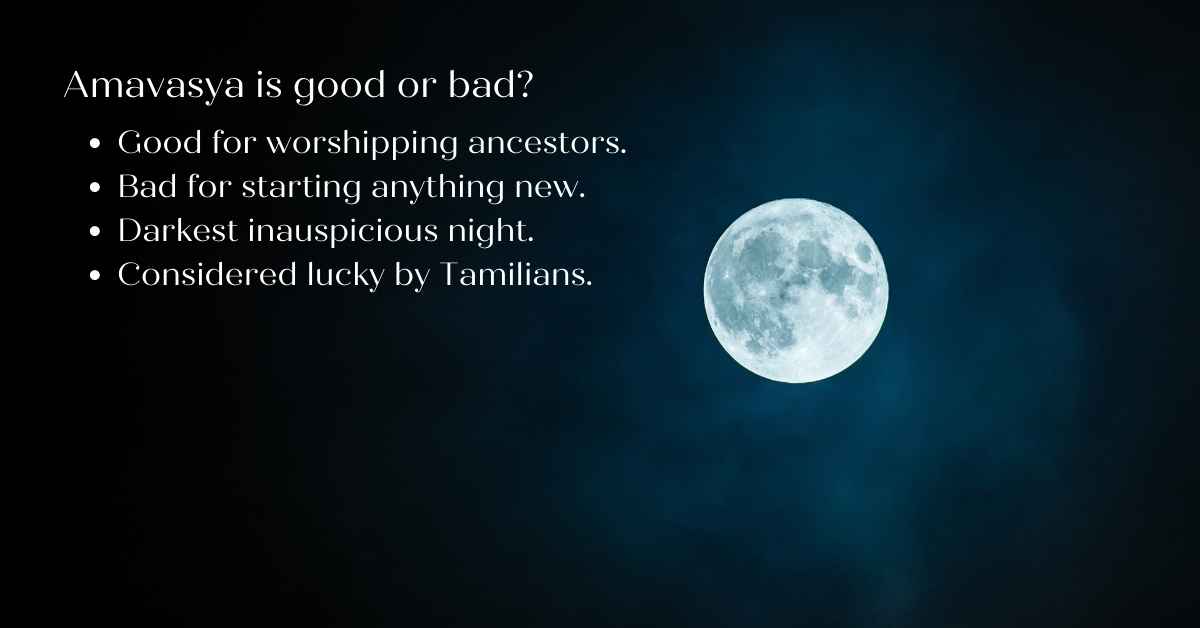 Amavasya in Hinduism is of enormous religious importance. It is considered a suitable opportunity to remember and revere the family’s ancestors and departed souls. It is thought that the sun reaches them the day they are missing from Moonlight. Belief is also that the deceased ancestors are descending on the earth and visiting their children and descendants on this day.

The Sanskrit words ‘Ama’ and ‘Vasya’ imply united and habitation, respectively. As a result, it denotes living together, and togetherness indicates strength. It is a day when dead ancestors are worshipped, and any fortunate endeavour carried out with the blessings of ancestors has a very little probability of failing.

So, is Amavasya good or bad? What do people believe about it?

In Amavasya, people feel everything is severe. You will feel more imbalanced in Amavasya. Human emotions and traits are boosted to their height today, as the gravitational strength of the moon moves everything up. The same goes for your blood and energy on that day. This is the impact of excessive blood flow into your mind, and excessive energy flows into your body.

Many people consider Amavasya Day to be unlucky since it is thought to be the night when evil spirits are most potent. However, if you’ve heard of black magic, you’re probably aware that it has a strong influence on Amavasya.

Goddess Kali and Lord Shiva are considered destroyers of evil spirits or shadows of evil, so they are honoured on this day. Some individuals fast on this day. They hope of having their wishes granted, and that doing so will also absolve them of all their sins.

The darkest time of the month is No Moon Night. On this night, no auspicious activity is performed. It is thought that if we start something new on this day, we will fail miserably. Some people even avoid making travel plans on this day. So, Amavasya is good or bad cannot be debated for particular cases. It is defined as inauspicious as it is.

When the Amavasya falls on a Monday, observing a fast ensures exemption from widowhood as well as a successful progeny. However, there are many reasons why it cannot be decided whether Amavasya is good or bad.

Every Amavasya is auspicious for paying homage to the forefathers. For the forebears, Shraadh can be performed on Amavasya. This Puja also ensures that the family will have healthy children with no physical or mental problems. Therefore, whatever offerings you make on this day will reach the ancestors, thanks to Yama’s blessing.

Amavasya is considered auspicious by Tamils, who use it to start a new endeavour and do not hesitate to do so. They regard this day as a time of progress and power. There will be no moon on Amavasya, but the next day, there will be a moon representing growth. Therefore they want their effort to develop and succeed. The moon is in a developing phase.

Amavasya is good or bad? Other beliefs

According to the Garuda Purana, Amavasya is unlucky. Therefore, no new work should begin on this day except Karthika Amavasya, which falls on Deepavali.

This is a day when no one travels, and no one works. Instead, they believe that because there are no moon, dark powers and black magic will ascend.

These evil forces will do everything they can to prevent our auspicious activity from succeeding. Those travelling fearsome uncertainty, so they will not travel on this day.

Amavasya may be good or bad, but it is a general belief that you should not start ay auspicious work on this day. Opinion varies from people and communities. So, whether Amavasya is good or bad cannot be decided on a single factor.

It is undoubtedly the best day to pay your respects to your ancestors. But, it might not be suitable for any other tasks. So, here it is all about what people and communities believe.