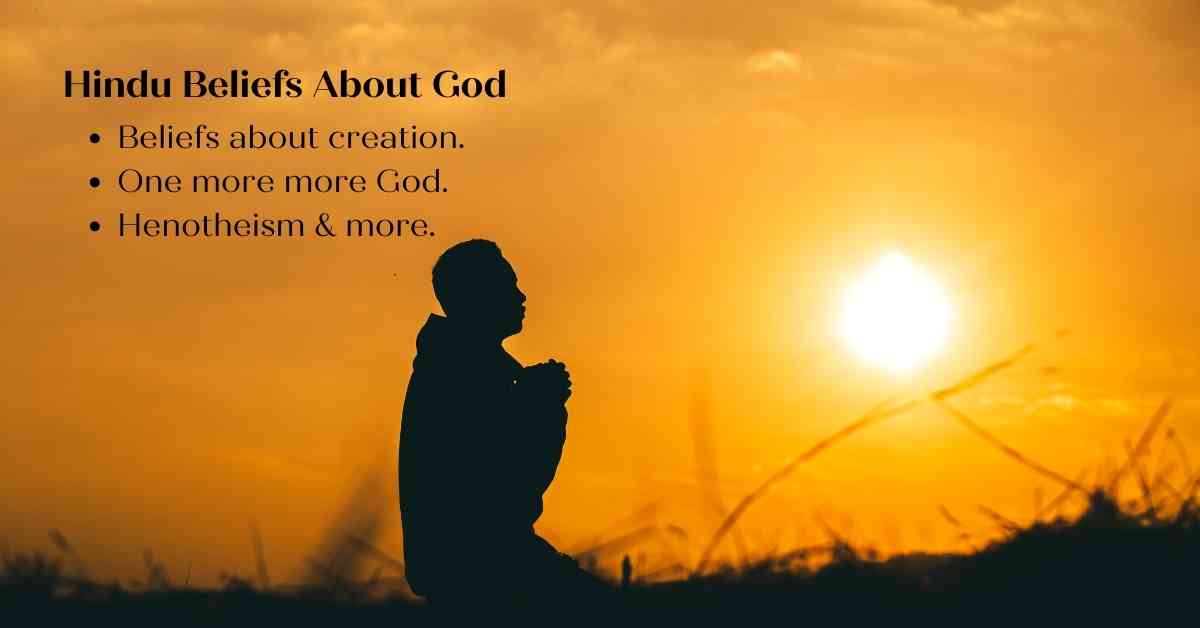 Everyone believes in God. Each of us has one or the other reason to believe in the existence of the almighty. All around the world, we pay our respects, ask for his guidance and protection when needed.

In India, people have their faith in God and his various Avatars. On the same lines, the Hindu beliefs about God are more about faith and intense devotion.

So, if we try to understand the actual devotional beliefs and followings about Hindu mythology and religion, we may have to dig a little deeper.

What are the Hindu beliefs about God?

Hinduism is monotheistic and henotheistic at the same time. Hinduism isn’t a polytheistic religion. The Hindu viewpoint is better defined by Henotheism (meaning “one God”). It entails worshipping a single God while acknowledging the presence of other Gods. Hindus believe in a single all-powerful deity who animates the entire cosmos. God is said to exist both within and outside of the world.

Do Hindus believe in one God?

No. Hindus worship go in various Avatars and recognitions. They believe in God as both a formless Absolute Reality and a personal Lord and Creator. This independence gives Hinduism, the world’s oldest monotheistic religion, a unique perspective on God.

How many gods do Hindus believe in?

Together with the millions of other deities, these gods are thought to be manifestations of one supreme God or a single, transcendent entity known as Brahman (not the priestly social class).

Do Hindus believe in Jesus?

Some Hindus consider Jesus to be an incarnation of the divine Vishnu. According to Hindu mythology, Vishnu incarnates in the globe regularly, taking on various forms such as a fish, a dwarf, and a human person to preserve or restore life and order on the planet.

According to the Christian faith, there was only one incarnation of God, Jesus Christ, the ultimate and definitive revelation of God, who came to save us once and for all. On the other hand, Hindus who believe in Jesus see him as one of many manifestations of the divine’s ongoing intervention in the world.

Do Hindus believe in one or more God?

Hindus worship the same Supreme Being, known as Brahman, under several titles. This is because the people of India, speaking a variety of languages and cultures, have each interpreted the one God in their unique way.

The almighty abilities of the Supreme God are uncountable. The term Brahman refers to God when he is formless. The term Paramatma is used to allude to God when He takes on form. Brahma, the creator, Vishnu, the sustainer, and Shiva, the destroyer, are the three primary forms of almighty God.

Hindus believe in many Gods, each of whom has a particular purpose, much like the executives of a vast organisation. It’s important not to mix these up with the Supreme God.

According to Hinduism, God is not far away, residing in a distant heaven, but is within every soul, in the heart and consciousness, ready to be discovered. And understanding God in this intimate and experiential sense is the purpose of Hinduism.

What do Hindus believe about creation?

Brahma is believed to be the creator of the universe. After Brahma created the earth, it is Vishnu’s might that keeps the world and humans alive. As part of the cycle of birth, life, and death, Shiva will eventually destroy the cosmos. The Hindu beliefs about God are built around creating, nurturing and destroying. They firmly believe that God is meant to give you life and has the right to take it away from you.

So, whenever we talk about the Hindu beliefs about God, we must understand that it is all about one deity. But, due to diversification, it is preached as per the religion and the people.

It is eventually about belief. You may not believe it, but Hindus believe that there are 33 crore deities. How many Gods? 33 Crore. So, start researching on that number and drop a comment at the bottom to share your experiences.