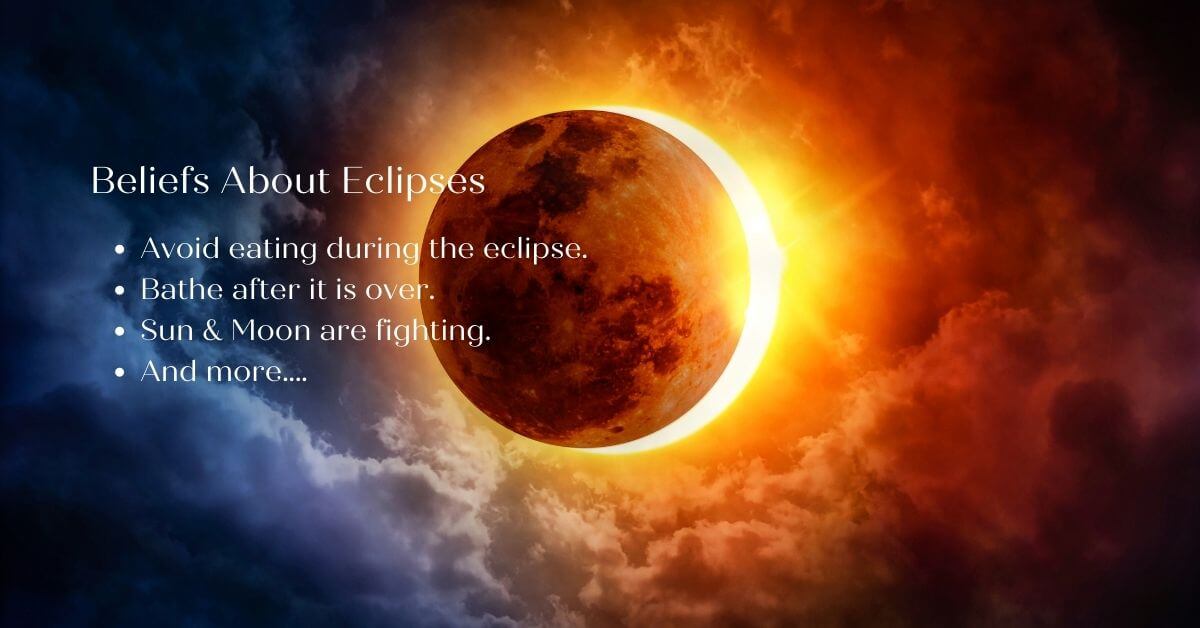 Eclipse: An astronomical event in which one celestial body entirely or partially obscures another. It usually happens when three celestial bodies align.

These are common occurrences with the Sun and the Moon. What exactly do they mean? Or, more specifically, what does their occurrence imply? There are numerous beliefs about eclipses all over the world.

The Aztecs, Mayans, and other tribes all had their own ideas about what an eclipse meant. It could be either solar or lunar. Although you may not believe, some beliefs are based on fear. There is no scientific evidence to back them up.

So, we’ve compiled a list of some weird beliefs about eclipses.

Avoid eating during an eclipse

It is believed that intense ultraviolet rays are emitted during an eclipse, which can poison food. People avoid eating during the eclipse because they think it will poison them. Even today, people do not drink water during an eclipse. Talk about weird beliefs about eclipses.

Sun and Moon are fighting

The Batammaliba people of Western Africa’s Togo and Benin believe that the Sun and Moon are at odds. Fearing this, they would pray to both, pleading with them to resolve their differences and put an end to the fighting.

Many people around the world still believe that pregnant women should avoid going outside during an eclipse. They are said to be vulnerable at this time and can be easily exploited. They believe that the dark Moon will curse the unborn child, causing him or her to be born with a disability or disease. They are also not permitted to touch any sharp objects for fear of leaving an unholy mark on the unborn.

You may not believe it, but the Aztecs believed that if an earthquake coincided with a solar eclipse, it would herald the end of the world.

This would be the end of the world. Every year, they would sacrifice a human to appease the Gods and prevent the world from ending. This is what we call super weird beliefs about eclipses.

Another explanation can be found in Korean folklore. It suggests that solar eclipses are caused by mythical dogs attempting to steal the Sun. Many cultures traditionally gather to bang pots and pans and make loud noises during a solar eclipse. They believe that making a loud noise scares away the demon who is responsible for the eclipse.

We’ve all heard the NECTAR CHURNING story. During this time, the demon RAHU desired to sample the nectar for himself. He once disguised himself and entered a banquet. The Sun and Moon learned of his plans and informed Lord Vishnu.

Vishnu then beheaded Rahu, but because he had consumed the nectar, his head remained alive while his body died. Rahu’s head is said to be constantly chasing the Sun and Moon in rage. He occasionally catches and eats them. That is precisely what the eclipse is. But, because his body had died, he couldn’t keep them forever. As a result, the eclipse lasts only a few minutes.

Greeks believed that the Sun is angry

The Greeks thought that an eclipse meant that God was angry and would punish the king. They planned to replace the king with a substitute to save him from God’s wrath. When the eclipse is over, they will restore the king and execute the substitute.

Take a bath after the eclipse is over.

In India, this is one of the prominent beliefs about eclipses. People bathe, change into clean clothes, and dispose of anything they used during the eclipse. In addition, a sprinkling of holy water is sufficient to ward off any evil.

Even today, people hold a variety of beliefs about eclipses. People still consider it a bad omen, cursed and disastrous. People in Italy believe that planting a flower during an eclipse causes it to bloom brighter and more colourful than others.

Believe it or not, but there are stories related to every celestial occurrence. May it be an eclipse, an earthquake or any other. We even pray celestial bodies as a part of our ritual. In India, we have the ‘NAVRATNA”, means the nine planets. We pray to all of them individually. We have our own beliefs about blessings, curses and whatnot.

So, beliefs are there. You may believe it or not.

If you wish to contribute something more to this blog, just comment here, and we will take it up.