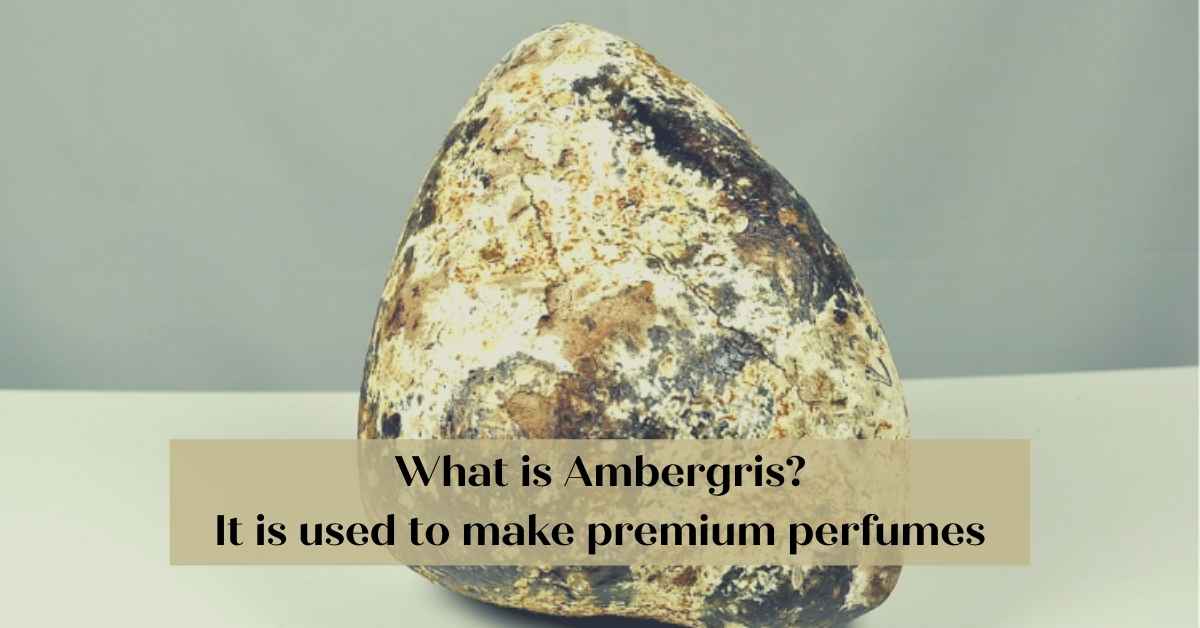 Did you know that there something known as AMBERGRIS, in a layman language, we call it whale vomit. It is a super expensive product used to make high-quality perfumes. People also call it whale vomit perfume, just like they call CIVET COFFEE as POOP COFFEE.

Ambergris, often known as grey amber, is a solid, waxy, flammable material generated in the digestive system of sperm whales. It has a dull grey or blackish appearance.

How is Ambergris formed?

Ambergris is a bile duct secretion found in the intestines of sperm whales that can be discovered floating in the water or washed up on beaches.

It’s occasionally discovered in the stomachs of dead sperm whales.

Scientists speculated that the fluid is created by the whale’s gastrointestinal tract to ease the passage of hard, sharp things that it may have ingested after huge squid beaks were discovered within lumps of Ambergris.

The odor of freshly created Ambergris is sea and fecal. As it ages, it develops a sweet, earthy perfume, similar to that of rubbing alcohol but without the vaporous chemical astringency.

It has been characterized as having a solid fecal odor when removed from the whale.

However, once the bulk has dried out, the aroma is believed to be more pleasant. It’s commonly musky at this point.

You can burn a hole in your pocket with whale vomit or Ambergris.

A kilogram of whale vomit can set you back more than a crore of rupees. Sperm whales create a wax-like material in their digestive tracts.

Ambergris is to as “sea treasure” and “floating gold.” It is precious, commanding a price higher than gold. This is due to its high value as a fixative and a component of exquisite perfumes.

For millennia, Ambergris has been a one-of-a-kind phenomenon.

The material is found in the fossil record dating back 1.75 million years, and people have likely been utilizing it for over 1,000 years. It’s been dubbed “sea treasure” and “floating gold.”

For years, no one knew where it came from, and numerous theories were presented, such that it was solidified seafoam or enormous bird droppings.

The identification of its single producer, the sperm whale (Physeter macrocephalus), was not discovered until large-scale whaling began in the 1800s.

Squid and cuttlefish are among the cephalopods that sperm whales consume in significant quantities. The indigestible parts of its food, such as beaks and pens, are usually vomited out before digestion.

However, these portions can occasionally travel into the whale’s intestines and join together. They gradually turn into a solid lump of Ambergris, which grows inside the whale over time.

Ambergris has been used to fix the odors of perfumes in the perfume and medicinal industries for many years. Synthetic compounds supplanted it in the twentieth century, so it no longer has much utility. However, it is still useful as a fixative in perfumery.

So, what is whale vomit perfume? It is nothing but a substance called Ambergris used in various scents and medicines as well.

Ambergis has also been used successfully in the Ayurvedic/Unani system of medicine for generations; more research and clinical trials are needed to substantiate its medicinal usage. When administered in combination with other herbs or medications, it may have a potentiating effect.