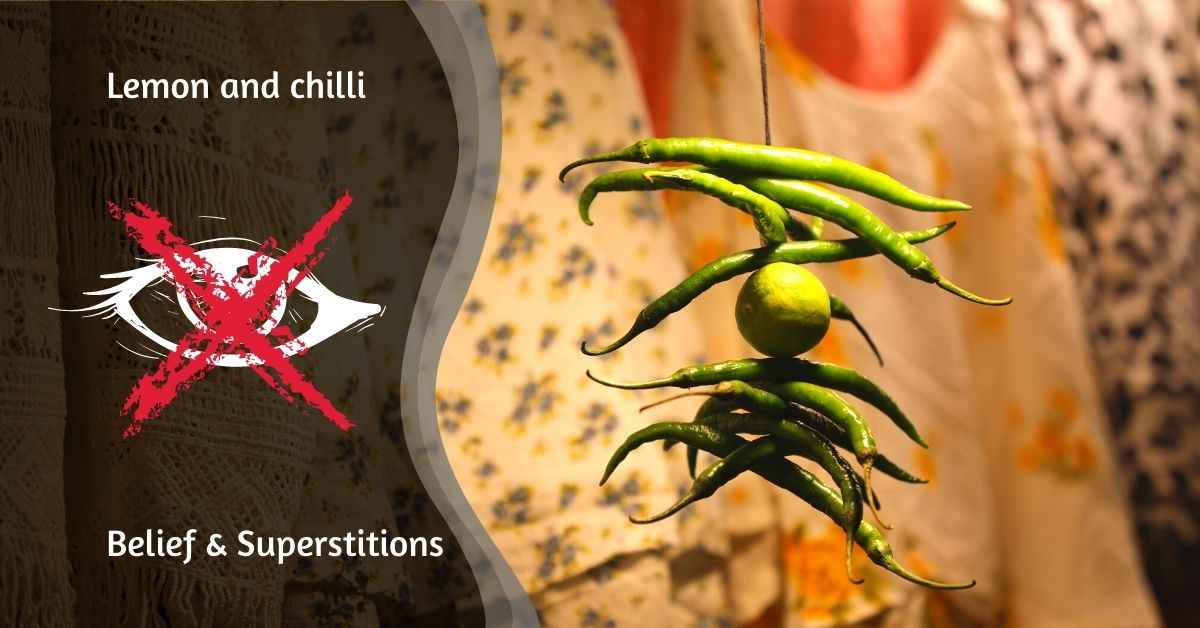 May 11, 2021May 14, 2021 Sagar HedauNo Comments on Lemon and chilli hanging on the door? What’s the belief and significance?

Lemon and chilli hanging on the door? What’s the belief and significance?

Have you ever seen lemon and chilli hanging on a shop entrance? In India, you will undoubtedly come across these in both rural and urban settings.

If you believe in Evil, Evil Eye, or Evil Forces that may try to damage you or your company, these two simple things are believed to help you ward them off.

Lemon and chilli hanging on the door?

You may not believe it, but people trust it. The smooth operation of their companies and shops strengthens their trust. India is a land of commitment, religion, and values. When something has helped someone overcome a tough situation, they will undoubtedly share it with others.

We are obedient to or observe several principles. What is the reason for this? Since our forefathers and mothers handed them on to us. We were never interested in determining whether or not it was valid.

LEMON AND CHILLI HANGING ON THE DOOR is one of them. Not only on doors but also on a scooter or the inside a car. Why are people so interested in this?

Do they really believe it would aid in the warding off of evil? It may be. Let’s see.

You’ve probably heard of Goddess Lakshmi, also known as the Goddess of Wealth. Alakshmi, her sister, was the one who bought poverty and suffering for her. Alakshmi was thought to be unlucky.

People believe that sour foods should not be prepared during festivals because they should attract Alakshmi. That is why, during festivals, sweet dishes are prepared to attract and obtain the blessing of GODDESS LAKSHMI.

A short but beautiful story

Another theory claims that lemon and chilli hanging on the door would shield you from harmful energies. These are deep convictions, not just superstitions.

Faith, we still claim, aids us in being stronger. As a result, believing that lemon and chilli can fend off evil allows us to concentrate on our jobs rather than thinking about the negatives that might or may not occur. In addition, 7 chillies and 1 lemon are commonly used. 5 chillies and 3 lemons are used by others.

Theories about lemon and chilling hanging on the door

According to some theories, people used to pass through forests alone in the past. As a result, they used to bring lemon and chillies with them. The significance of lemon is that it is used to quench thirst when combined with water.

Lemon and chilli hanging on the door with a cotton thread are thought to be beneficial.
The lemon juice and chilli are soaked in the thread, which then vaporizes in the air. It is suitable for inhaling as well.

We say “NAZAR UTARNA” in Hindi, which literally translates to “casting off the evil eye.”
It is often said that you should never step on a lemon or a chilli that has fallen on the driveway.
It’s not a good omen. Since it is assumed that if you step on it, you would be consumed by the evil that the person who threw them on the road was attempting to ward off. As a result, the bad will flee him and wreak havoc on you.

All of these views lead to the conclusion that there are certain beliefs for which we lack evidence but still believe. It’s ingrained in our ancestors’ values and practices.
We don’t mean to offend them, but we also don’t put too much emphasis on them.

There are many other beliefs related to curses, mysteries about Indian temples and dreams. We cannot prove each and everything to be true. So, it is all about belief and mostly about science vs religion.

If you have such facts or beliefs, do share with us in comments or on mail. We would love to add those here.