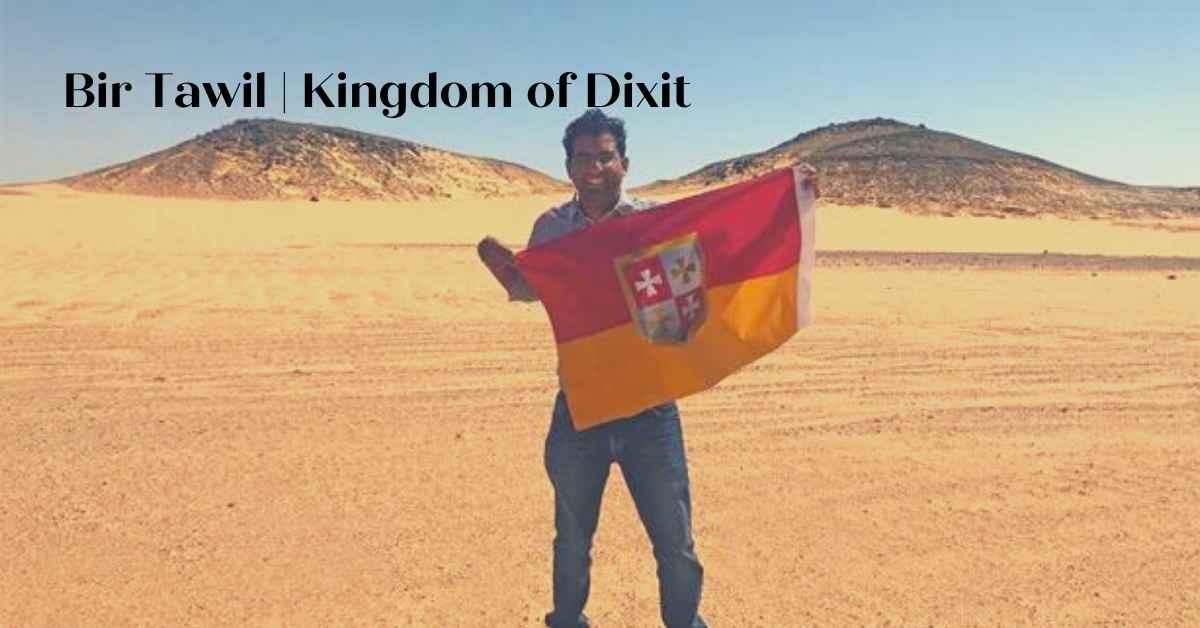 Do you know the KINGDOM OF DIXIT or anything about it? We have some weird information here about how a techie from India claimed it as his land.

Bir Tawil is a 2,060 km2 (795.4 sq mi) deserted stretch of land on the Egyptian-Sudan border claimed by neither country. Despite the area’s quadrilateral shape, it is frequently referred to as the Bir Tawil Triangle when spoken in conjunction with the neighboring Halaib Triangle; the two “triangles” border at a quadripoint.

Who is the cliamer Suyash Dixit?

Suyash Dixit, an Indore computer coder, has given an unclaimed area at the Egyptian-Sudan border the moniker the Kingdom Of Dixit. The 2,000 sq km Bir Tawil territory is unclaimed and uninhabited. In a Facebook post by him last week, Mr.Dixit recounted his experience traveling to the site where he placed his kingdom’s flag and planted the seed. He claims in his post, “Following the early civilization ethics and rule, if you want to claim land, you need to grow crops on it. So I have added a seed and poured some water on it today. It is mine.”

He described his expedition as “the sole area on Earth where humans may live and survive but is not a part of any country,” writing that he traveled 319 kilometers (to and back) in a remote desert with no roads to claim this unclaimed land.

How was it executed?

He described the voyage as “hazardous” in his post, claiming that the route he chose was through an international border controlled by the Egyptian military, who have shoot-at-sight instructions. However, he says that this “dangerous” plan was on his bucket list and worth a shot.

He stated he began his “epic” adventure in Egypt. He was granted permission to travel to Bir Tawil on three conditions: he would not take any photographs, carry no valuables, and return the same day.

He planted two flags in the territory he dubs the ‘Kingdom of Dixit,’ one where the boundary begins and the other where the capital, Suyashpur, is located. In his post, he also declared his father to be the President of the Kingdom of Dixit.

Jeremiah Heaton of Virginia, who arrived in Bir Tawil in 2014 and claimed it for himself as the “Kingdom of North Sudan,” has labeled Dixit a “fraud” and alleges that the Indian never made it to Bir Tawil.

Heaton came to Africa three years ago with the sole intention of claiming Bir Tawil as a sovereign state and handing it to his daughter Emily, who was seven at the time, as her kingdom since she had always wanted to be a princess.

Heaton claims to have established embassies for his kingdom in the US, Denmark, Lithuania, and the Czech Republic and prepare a charter of rights for the realm. However, neither a country nor an international organization has recognized the “Kingdom of North Sudan.”

Who claimed it first?

People are pointing out that Dixit is not the first person to claim Bir Tawil for himself and that his statement is not recognized by the international world, as Twitter slowly wakes up to Heaton’s charges. Scroll.in wrote to both Heaton and Dixit for comments.

Dixit replied that he had traveled to Bir Tawil but that he would not reveal his exact path since he did not want to encourage others to make the same journey. Furthermore, he claimed he never sought clearance from the Egyptian military and instead relied on information provided by local Egyptian police.

He promised to respond to Heaton on Twitter. “However, I do not wish to create any negative atmosphere there, and I encourage others to do the same,” Dixit stated. “I hope you understand that I am CEO of a reputed firm and the reputation of my clients goes with it.”

People are willing to get citizenship.

Suyash says, “We want ideas from all around the world, and we want to provide citizenship to anyone who can contribute to humanity’s progress. That is why we came up with the concept of being able to connect everyone online from anywhere on the planet; this is the entire goal behind it.”

So, if you’re willing to be a part of this newly formed nation which is, as said, going to be tax-free, then you should read more about it and try convincing the king to give it to you. you may not believe it, but it might actually be possible.