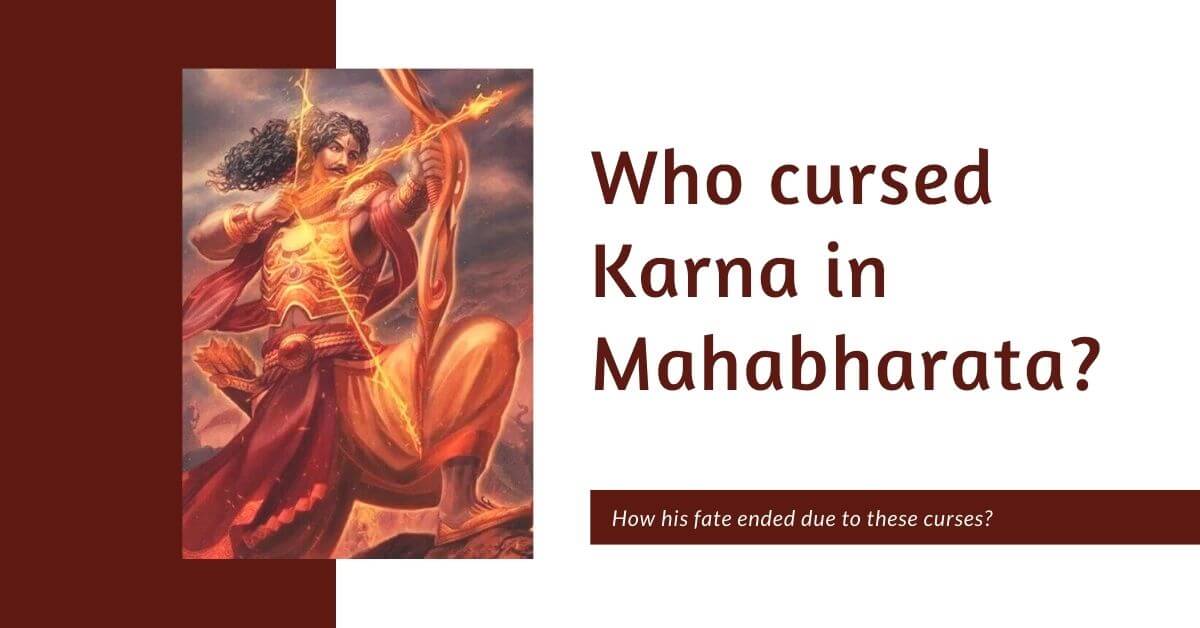 There are several interesting characters in the Mahabharata, each with their own roles and personalities that complement the plot.

“KARNA” is one of these characters. Do you know Karna had to bear and live with 3 curses. What were the 3 curses on Karna? Who cursed Karna in Mahabharata?

Karna: The son of Surya & Kunti

The son of Surya[Sun God] and princess Kunti [mother of Pandavas]. He was thus a Demi-God by birth. Despite all the facts and greatness, there were three curses on Karna, which impacted him deeply. So, who cursed Karna in Mahabharata? Let’s understand.

Adhirata, a charioteer of King Dhritarashtra, raised Karna. Dronacharya declined to teach Karna because he was a low caste follower, and he had to fight for his learnings. Karna knew he’d have to fight against the odds once more, so he decided to teach himself with the aid of his brother Shrona.

However, according to ancient practises, one must learn any craft from a Guru. As a result, he chose Surya as his instructor. He approached Parshuram with a desire to improve his abilities and learn how to use divine weapons.

Parshuram, on the other hand, only took Brahmins as apprentices. Karna had to trick Parshuram by posing as a Brahmin in front of him. Karna learned all the skills and was declared a great warrior by Parshuram.

When Parshuram was resting on Karna’s lap one day, a bee stung Karna on the thigh. Since he was a good disciple, he did not want to disturb his Guru’s sleep and endured the agony. But, eventually, his wound began to bleed, waking Parshuram up.

Parshuram soon realized that a BRAHMIN lacks the ability to endure such suffering. Karna, he realised, had lied to him. As a result, he cursed Karna, saying that HIS MARTIAL SKILLS, including the use of BRAHMASTRA, would abandon him when he needed them most.

Indra, the King of Gods, stung Karna in the form of a bee to get him cursed by Parshuram.

Karna walked through the woods in despair, feeling dejected by the curse.

Karna, a skilled and devoted warrior, continued to hone his skills. He accidentally hit a Brahmin’s cow while practising one of these arts, “SHABDAVEDI VIDHYA,” or the art of hitting the target by detecting sound. Enraged with Karna’s act, the Brahmin cursed that he would be killed with the most helplessness when his concentration is diverted from the enemy.

Karna put all of this behind him and went on to become the king of Ambha [today’s Bhagalpur] after beating Arjuna in a Hastinapur competition. While on a tour of his kingdom, Karna saw a girl weeping in fear of her mother because she spilled the ghee. Karna, ever generous, told her he would give her new ghee. But the girl insisted that she wanted the spilled ghee only. Karna took the soil mixed ghee in his fist and squeezed with all his might to extract the ghee in the pot. Due to this, BHOOMI DEVI [Mother earth] became furious that Karna hurt here for the sake of a mere child. So, she cursed him that, in a crucial battle, she would trap his chariot wheel the same way he held the fistful soil, thereby making him vulnerable.

The 3 Curses on Karna

So, there 3 curses on Karna eventually decided his fate and destiny. So, if you ever face the question, “Who cursed Karna in Mahabharata?” remember, they were.

These 3 curses on Karna defined the complete life and his overall sufferings. There are many other famous curses in mythology which you can read here.