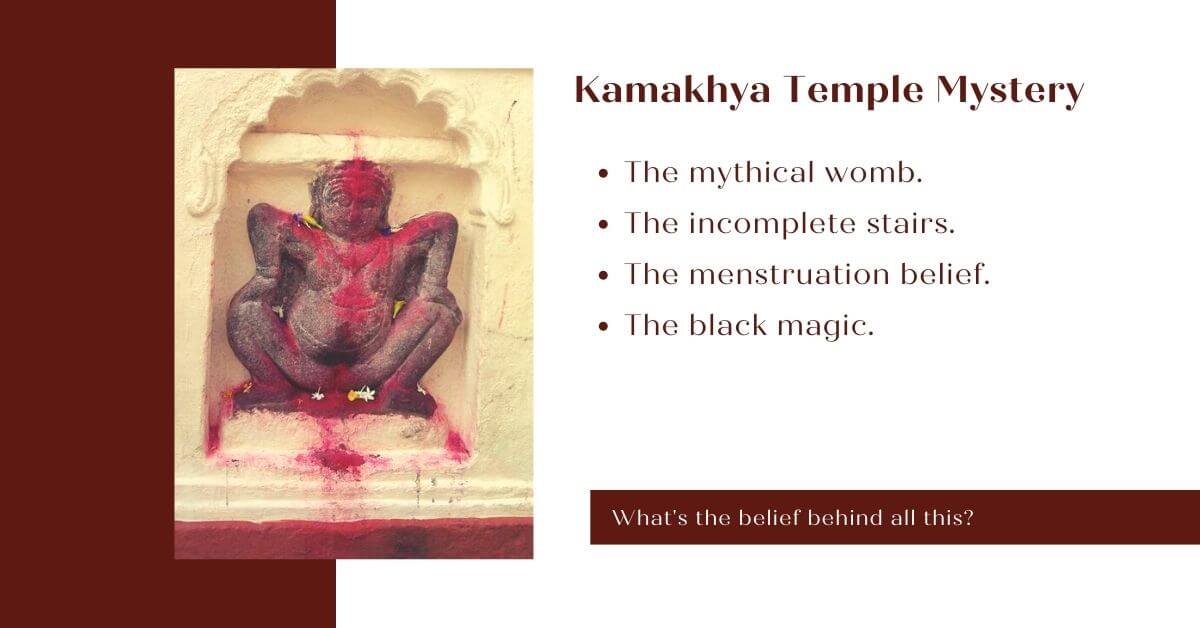 Kamakhya Temple, located in Guwahati Assam, is one of the oldest Shakti Pithas. A Shakti Pitha is a shrine that idolizes the Goddess as the supreme deity. There are a total of 51 Shakti Pithas. The Kamakhya Temple Mystery is an extraordinary story, which makes you think about the wonders it has associated with it.

As per the legendary stories, Shakti Pithas were formed because of Goddess Sati, wife of Shiva. She did this because she could not bear her father’s humiliation of her and her husband, Shiva. Angered by this, Lord Shiva took the Rudra Tandav to mourn her. Seeing this destructive avatar of Shiva, Lord Vishnu cut her body into parts [51 parts] which fell on earth and became sacred sites.

All these 51 sacred sites are not in India. Out of these

Out of these 51, one is located in Assam. This shrine is known as the Kamakhya Temple. This shrine has the womb or the vagina of the Goddess Shakti, which is one of the 51 parts. This is why the place is also called the Yoni Temple. So, what is the actual Kamakhya Temple mystery? What do the Goddess and the related rituals signify? Are they true or just beliefs?

The mythical womb in the sanctum

At Kamakhya temple, you don’t actually worship a deity or a Goddess. The temple is a house to the Shakti Goddess’ womb and vagina. People pray to the womb, which is regarded as the symbol of every woman’s power to give birth and Shakti.

Legends say that the Goddess goes through menstruation during June-July month. The temple remains closed for three days and opens on the 4th day to celebrate the AMBUWASI PUJA. It is also said that the Brahmaputra river turns red during this time. Devotees offer clothes to the temple to get them soaked in the holy blood. This is a very boggling Kamakhya temple mystery that is quite beyond imagination.

A story tells us that a demon NARAKA once fell in love with Goddess Kamakhya. When he proposed to marry her, the Goddess gave him a task on whose completion she will marry him. The task was to build stairs from the bottom of the Nilanchal Hill to the top. NARAKA was about to complete the task, but the Goddess tricked him by converting a crow into a cock to give an illusion that it is morning. NARAKA got tricked and stopped the work. These incomplete stairs are there today, known as MEKHELAUJA PATH.

People experience the real power of the temple and the strength of the Goddess if they have suffered genuinely evil forces or activities like black magic. Goddess Kali is present here in 10 different forms, which can cure anyone of the black spells.

It is all a part of the belief that people have. The Kamakhya Temple Mystery is one fascinating story we have come across.

Read our other fascinating blogs here. If you have any such amazing facts or stories, just drop them in the comments.