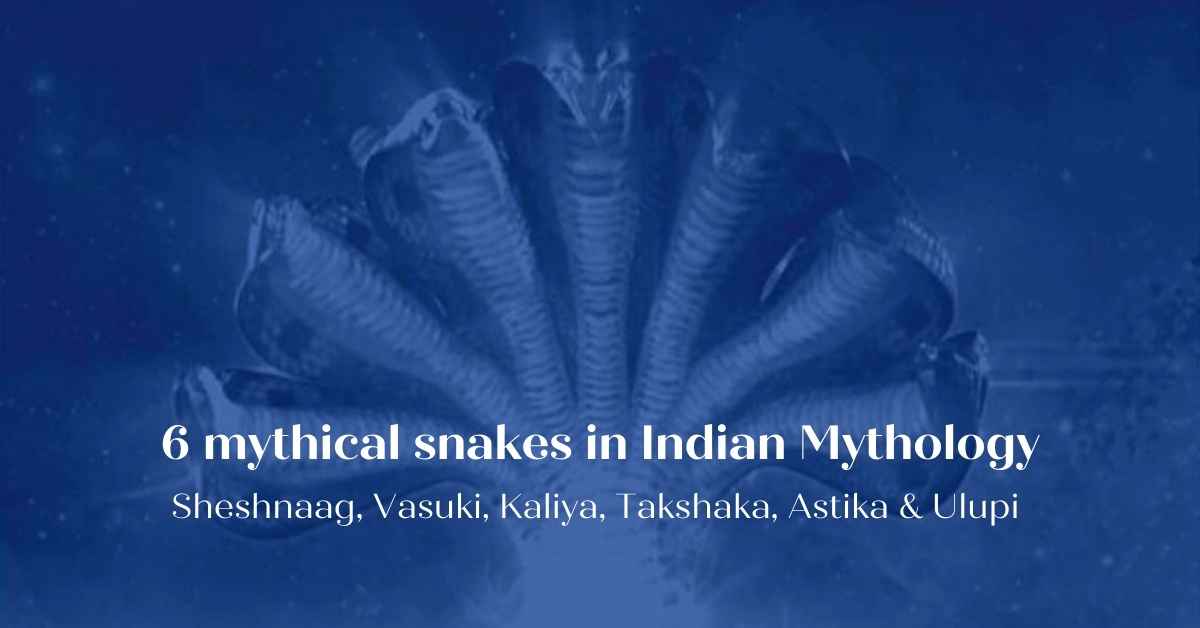 The term mythology denotes both the study of myth and the body of myths belonging to a particular religious tradition.

We’ve all read about many mythologies and mythological figures that we were previously unaware of. We read a lot of fables, folktales, and stories with different characters.

The mythical snakes in Indian Mythology

Astika was the son of Jaratkaru and serpant Goddess Manasa, the sister of the great Vasuki. In Mahabharata, Astika saved serpent king Takshaka from a snake sacrifice known as Sarpa Satra. King Janamejaya conducted this sacrifice to avenge his father, Parikshit, who died of a snake bite. That day denoted as Shukla Paksha Panchami in the Shravan month, is celebrated as Naag Panchami.

Adishesha, aka Sheshnaag, is the king of all Nagas. He is regarded as one of the earliest primitive beings. It is believed that Sheshnaag holds all the planets in the universe on his hood. He is a devoted follower of Lord Vishnu. Legends say that when Sheshnaag uncoils, time moves forward, but when he recoils, everything ceases.

Being a devotee of Lord Vishnu, Sheshnaag has been in many human forms.

Sheshnaag is one of the most powerful mythical snakes in Indian mythology who has a much bigger role in defining the universe.

Vasuki is a king of serpents prescribed in both the Hindu and Buddhist religion. He is the one having a gem called Naagmani on his head. Vasuki is the snake that you see coiled around Lors Shiva’s neck. Lord Shiva had blessed him and wore him as an ornament.

The great Samudra Manthan [churning of the sea] between the Devas & Aruras to extract the Amrita [nectar] was executed with the help of Vasuki coiled around Mount Mandara. Vasuki as a well known mythical snake has had a defining role in the nectar churning.

Kaliya was a venomous snake living in the Yamuna river in Vrindavan. The actual home of Kaliya was Ramanaka island. But he was driven away from there due to Garuda [the prime enemy of all serpants]. Kaliya stayed in Vrindavan because Garuda was cursed from coming there.

One day, Radha was walking along the river bank when she saw the mighty snake. She fled to Vrindavan and told everyone about it. When Lord Krishna heard this, he became enraged and resolved to teach Kaliya a lesson for bothering her. He went to the Yamun River searching for Kaliya, who, upon seeing Krishna, Kaliya coiled around his legs and constricted him. But for all his deeds, Krishna has decided to kill him, but due to Kaliya’s wive’s prayers, he banished him back to Ramanaka and assured that Garuda wouldn’t bother him.

Takshaka is another Nagaraja [serpent king] mentioned in Ramayana and Mahabharata. He is described as the resident of Takshashila, his new territory, after Pandavas banished his race from the Kurukshetra.

Takshaka was a resident of the Khandav forest. Arjuna set fire to the forest. Takshaka, the Naga chief, was not present at the time because he had gone to Kurukshetra. But Aswasena, Takshaka’s mighty son, was present. Arjuna assassinated Takshaka’s wife, Aswasena’s mother. However, Aswasena escaped to exact revenge on his mother’s murder. Aswasena attacked Arjuna during the Kurukshetra War while he was fighting Karna. Arjuna, on the other hand, managed to flee from him.

Ulupi was one of the four wives of Arjuna. She was the daughter of Kauravya- the King of Nagas. It said that Ulupi married Arjuna when he was in exile. Ulupi is described as half-maiden and half-serpent.

When Arjuna went to bathe in the Ganga river to perform his rituals, the current pulls him in. Later, he realises it was Ulupi, the Naga princess, who grabbed him and dragged him into the river. She controlled him with her hands and drove him around. They eventually arrived in Kauravya’s underwater kingdom, where Arjuna came across a sacrificial fire and performed his rites to it. Arjuna’s unhesitating offering of oblations pleased Agni.

Arjuna is impressed by Ulupi’s performance and inquires about her background. She reveals her ancestry and admits to falling in love with him. Arjuna, on the other hand, declines her proposal, citing his pilgrimage celibacy. Ulupi claims that he is only celibate to Draupadi, Arjuna’s first wife. He marries her and spends the night with her after being persuaded by her argument. They gave birth to a son named Iravan. Ulupi, pleased with Arjuna, grants him the boon that all animals that live underwater will obey him and that he will never be defeated in a battle underwater.

Each one of the mythical snakes has a definite role in Indian mythology. They have their unique identity and role, which have influenced many events.

So, these mythical snakes in Indian mythology are something about which you must know and learn more. Even if you dream about a snake, it may be one of these greats. You may not believe it, but every dream carries a particular meaning; you just have to explore the answer.