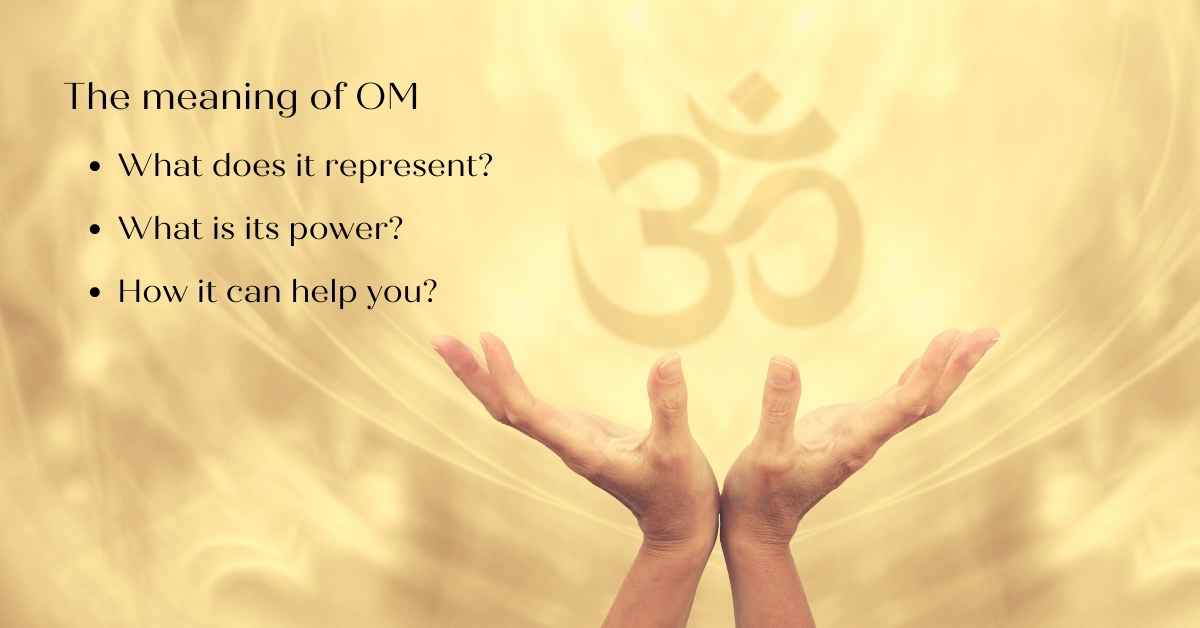 Om is a Sanskrit word and ancient mantra commonly used in Hinduism and Buddhism, among other faiths. It is sometimes chanted three times at the beginning and end of a yoga session. It is also spelt “AUM“. the meaning of OM is very diverse. It signifies the ultimate reality, consciousness and clarity of the mind and the soul.

Om is a syllable that is used as a foundation for many other mantras during meditation. Om Namah Shivaya, for example, means “I honour the divinity within myself.” Om Shanti is an alternative to saying goodbye that means “peace be with you“.

In Hinduism, the meaning of Om is as a significant and respected spiritual symbol. It is found at the beginning of almost every Veda, Upanishads and other fantastic kinds of literature.

It is a sacred spiritual incantation performed before and during the recitation of spiritual texts, puja and private prayers, rites of anyone’s passage (sanskara) ceremonies such as weddings, and meditative and spiritual activities Yoga.

A study was published in 2018 in the Asian Journal of Psychiatry. It stated that om chanting is associated with a sense of relaxation, citing beneficial changes in the autonomic nervous system. Also, it assists in limbic brain deactivation (an area that controls emotion, memories, and arousal).

The researchers concluded that chanting Om might have therapeutic potential in the treatment of a major depressive disorder. Although these findings are preliminary, they provide scientific support for the beneficial effects that many people experience when chanting Om.

Om was first mentioned in the Upanishads, specifically the Mandukya Upanishad, a sacred Hindu text that focuses on the various theories of the meaning of Om. Om is said to be imperishable in this text and to be all states of time, past, present, and future, as well as transcending time itself.

Meaning of the Om symbol

We all know the symbol very well. We have it printed in our mind. But, do we know what each curve in the Om signifies? What is the actual meaning of Om- the symbol. You might not understand completely. Let’s see here.

Each aspect of Om’s visual form represents a different state of reality.

The large lower curve represents the normal waking state (Jagrat). The mind identifies with the physical body and perceives the world through the senses in this state.

The upper curve represents the unconscious state, or deep sleep (Sushupti). This is a state of complete unconsciousness in which you are in a deep, dreamless sleep and have withdrawn from all physical and mental activities.

The middle curve (Swapna) represents the dream state. The dream state occurs between deep sleep and waking sleep and is where a person explores their subconscious. As your fears, hopes, and desires manifest in an imaginary world, your consciousness is turned inwards.

The dot represents enlightenment (turitya). In this state, a person becomes in tune with the absolute, realizing that all creation is made up of spirit and that they are all connected by that commonality. This state transcends the ordinary senses and can only be attained by clicking with spiritual energy.

Maya is represented by the crescent, which separates the three curves from the dot. Maya is the illusion that binds a person’s soul to the physical world.

By chanting Om, one can reach the dot of enlightenment and transcend the three curves of material consciousness. The meaning of Om is simple.

Om encompasses everything in the universe and is the essence of ultimate reality. The vibrations produced by the Om sound energize the chakras throughout the body, particularly the third eye and crown chakras, which assist us in connecting with our Divine selves.

The Om symbol is also said to represent the Hindu God Ganesha, as the shapes resemble his elephant form. His head and belly are represented by the curves on the left, while the curve on the right represents his trunk.

It is believed that Creator God Brahma’s thoughts caused a vibration that became the sound Om, which resulted in the creation of the world. Om is also known as Pranava, which means “control of one’s life force.”

As faiths are generally built around some holy trinity, the three phonetic components of Aum represent the rule of three. Aum represents not only the three states of consciousness but also the three realms: Earth, Heaven, and the Underworld, as well as the Hindu Gods: Brahma (the creator), Vishnu (the sustainer), and Shiva (the destroyer).

The meaning of om has tremendous significance in Hindu tradition and many others. People in many nations are trying to understand its power by various means. You may want to check this out as well to understand.