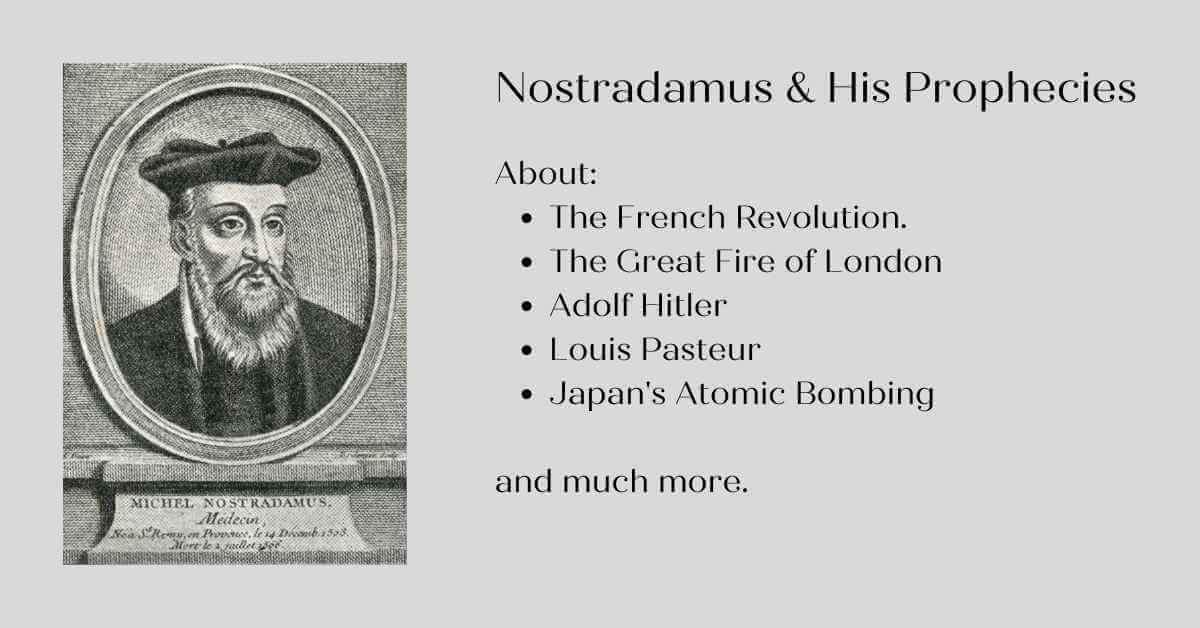 We have all heard this famous name- “NOSTRADAMUS.”

Nostradamus was a French astronomer, physician, and supposed Seer best known for his work Les Prophéties, published in 1555, a compilation of 942 poetic quatrains ostensibly foretelling future events. Nostradamus and his prophecies covered some of the very famous incidents from the world history.

He began working as an astrologer for several wealthy clientele in 1550 and, as a result of its popularity, continued composing almanacs for subsequent years. One of his most ardent admirers was Catherine de’ Medici. Les Prophéties, published in 1555, was met with mixed reviews at first since it drew significantly on historical and literary precedent.

What did people think about the Nostradamus prophecies?

Since the release of his Les Prophéties, Nostradamus has gained a large following of believers who, along with most of the popular press, credit him with accurately predicting many critical historical events.

Most academic sources deny that Nostradamus possessed any true supernatural prophetic talents. Some claimed that his connections between global events and his quatrains resulted from misinterpretations or mistranslations.

These scholars also contend that Nostradamus’ prophecies are generally ambiguous, applied to almost anything. Hence, they are unhelpful in establishing whether or not the author has true prophetic powers.

Nostradamus and his prophecies

Nostradamus published his collection of big, long-term predictions in The Prophecies. The first issue, which had 353 quatrains, was released in 1555.

His famous work: The Almanacs

From 1550 until his death, the Almanacs were published annually by far his most famous work. He frequently issued two or three Almanachs (detailed predictions), Prognostications, or Presages in a year (more generalized predictions).

The origin of Nostradamus predictions

Nostradamus claimed that his published predictions were based on judicial astrology—the astrological judgement, or assessment, of the ‘quality of events such as births, weddings, coronations, etc. But it was roundly chastised by professional astrologers of the time, such as Laurens Videl, for incompetence and for believing that “comparative horoscopy” could predict what would happen in the future.

According to research, much of his prophetic work consists of compiling old end-of-the-world prophesies, supplementing them with historical references and anthologies of omen reports, and then projecting them into the future, in part using comparative horoscopy.

As a result, he made numerous prophecies concerning ancient figures such as Sulla, Gaius Marius, Nero, and others, as well as depictions of “cloud warfare” and “frogs dropping from the sky.”

What people claimed about the Nostradamus Prophecies

Many followers believe that Nostradamus and his prophecies are accurate.

However, due to the subjective nature of these readings, no two of them agree on what Nostradamus foretold in the past or future.

On the other hand, many admirers agree that he foresaw

Some of the most unbelievable predictions were as follows:

“The young lion will overcome the older one,

On the field of combat in a single battle;

He will pierce his eyes through a golden cage,

Two wounds made one; then he dies a cruel death.”

On the fields of France in the summer of 1559, King Henry II of France (older one) stood up to joust the Comte de Montgomery (young lion), six years his junior. Both shields had lions on them. Montgomery’s lance tilted up on their final pass, piercing the king’s visor and splintering it. Two shards stuck in the king’s head, one through the eye and the other through the temple. Before dying in his bed, Henry agonized for ten days and finally died a horrible death.

“From the enslaved populace, songs,

While princes and lords are held captive in prisons.

These will in the future by headless idiots

Be received as divine prayers.”

The French people revolted in 1789 because they had had enough aristocratic rule. The peasants took over Paris and pressed their demands on the king. The princes and the lords were deposed and imprisoned in the Bastille before being executed by guillotine.

3.The Great Fire of London

“The blood of the just will be demanded of London

The ancient Lady will fall from her high place

And many of the same sect will be killed.”

The tiny fire that started in Thomas Farriner’s bakery on Pudding Lane in London on September 2, 1666 (in the year ’66) quickly grew into a three-day firestorm engulfed the entire city. One of the explanations for the just blood is the millions of flea-carrying rats that were slaughtered. Although the number of peasant deaths was not recorded at the time, it has long been assumed that six people died in the fire.

“From the enslaved populace, songs,

While princes and lords are held captive in prisons.

These will in the future by headless idiots

Be received as divine prayers.”

The French people revolted in 1789 because they had had enough of aristocratic rule. The peasants (enslaved people) took over Paris and pressed their demands on the king. The nobility (princes and lords) were deposed and imprisoned in the Bastille (prisons) before being executed by guillotine (headless idiots).

“The lost thing is discovered, hidden for many centuries.

Pasteur will be celebrated almost as a God-like figure.

This is when the moon completes her great cycle,

But by other rumors, he shall be dishonored.”

The discovery of microbial decomposition is credited to Louis Pasteur (Pasteur will be honored) (lost thing is discovered, hidden for many centuries). The New York Times published a report in 1995 by science historian Gerald L. Geison demonstrating that Pasteur offered a false narrative of his anthrax vaccine production (shall he be dishonored).

“PAU, NAY, LORON will be more of fire than of the blood,

To swim in praise, the great one to flee to the confluence.

He will refuse entry to the Piuses,

The depraved ones and the Durance will keep them imprisoned. “

(PAU, NAY, LORON) Pau, Nay, and Oloron are three towns in southern France. The capitalization suggests that there is something concealed within the words and that you should investigate more. NAPAULON ROY, meaning Napoleon the King in French, is formed by rearranging them. The (refuse admittance to the Piuses) refers to Popes Pius VI and VII, both imprisoned by Napoleon, and the (more of fire than of blood) relates to Napoleon’s non-noble origin.

“From the depths of the West of Europe,

A young child will be born of poor people,

He who by his tongue will seduce a great troop;

His fame will increase towards the realm of the East.”

“Beasts ferocious with hunger will cross the rivers,

The greater part of the battlefield will be against Hister.

Into a cage of iron will the great one be drawn,

When the child of Germany observes nothing.”

Hitler was born on April 20, 1889, in Western Europe, to very poor parents. In the years following WW I, Hitler used his over-the-top oratory skills to galvanize Germany into action, in part (who by his tongue). In the East, the Axis allied with Japan.

Hister is thought to be a typographical error. The “larger battlefield” refers to the Allied Powers overcoming Hitler and the German Army invading France (Beasts ravenous with hunger will cross the rivers).

“Near the gates and within two cities

There will be scourges the like of which was never seen,

Famine within plague, people put out by steel,

Crying to the great immortal God for relief.”

Early in August 1945, the United States launched two atomic bombs on the Japanese island of Hiroshima and Nagasaki (within two cities).

“The great man will be struck down in the day by a thunderbolt,

An evil deed foretold by the bearer of a petition.

According to the prediction, another falls at night time.

Conflict at Reims, London and a pestilence in Tuscany.”

On June 5, 1968, Bobby Kennedy was assassinated shortly after midnight (another falls at night time). The entire world was in mourning (Conflict at Reims, London).

10.The death of Princess Diana

Takes the Goddess of the Moon for his Day & Movement

A frantic wanderer and witness of Gods Law

In awakening the world’s great regions to God’s will.”

Princess Diana and Dodi Al-Fayed died in a vehicle accident at the Pont de l’Alma tunnel in Paris on August 31, 1997. The above quotation (quatrain) is used to emphasize the foreshadowing of Princess Diana’s death. Diana, according to believers, is the Roman Goddess of the Moon. The prophet is also known as Seer, according to legend. The only survivor of Diana’s disaster, Trevor Rees is known as Rees (Seer backwards). Nostradamus’ nickname is Seer, as he is a seer into the future. Although the number is one day off, the verse of the quote is 2:28, which is claimed as proof that Nostradamus knew she would be assassinated on the 31st.

“Earthshaking fire from the center of the Earth

Will cause tremors around the New City.

Two great rocks will war for a long time,

Then Arethusa will redden a new river.”

Nostradamus and his prophecies were out of this world.

People did not pay much attention to him at the time, but after his death, there were several debates and studies. His prophecies came true just as he predicted. As a result, it’s not fair to suggest that what he wrote was merely a guess. His time studying judicial astrology was well spent, and he is deserving of respect.

5 thoughts on “Nostradamus and his prophecies | 11 unbelievably true predictions”